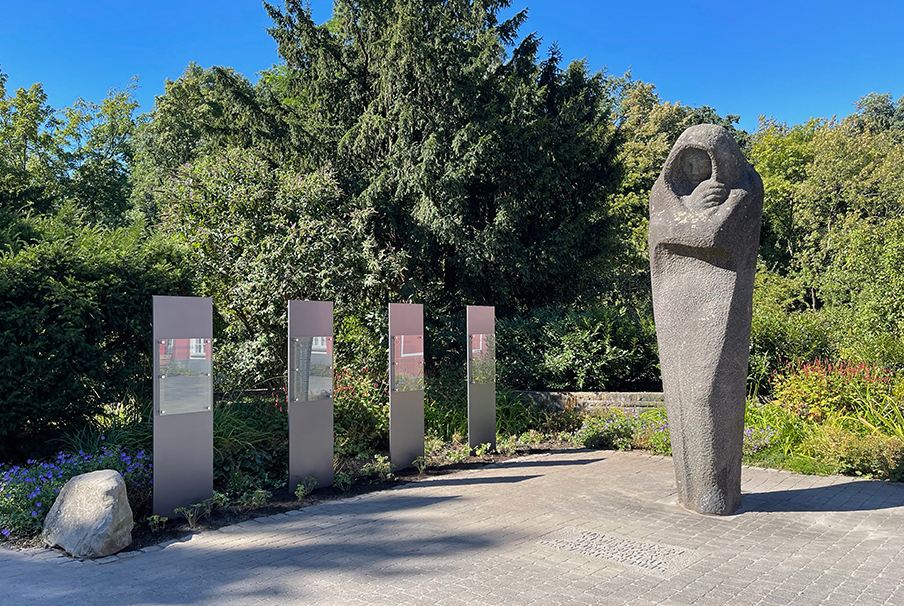 The memorial sculpture the “Die Trauernde / the Mourner” has been standing directly in front of the Oberhausen Memorial Hall since 1962. Initially, it met with much admiration, but later justified criticism of the memorial situation set in. Therefore, 60 years after its inauguration, the mourner was supplemented with a critical commentary, which has now come to stand directly next to the memorial sculpture in the form of four large-format panels.

Mayor Luise Albertz officially presented Die TRAUERNDE / The MOURNER on the 2nd of September 1962. The memorial statue was intentionally placed right next to the memorial hall which was opened on the same day since both commemorate the victims of national socialism (Nazi regime).

The CDU (Christian Democratic Union – Political Party) strove for a cenotaph for the victims of both world wars. This was a tradition that only commemorated the soldiers. By adding the victims of the Nazi regime, this traditional commemoration turned the cenotaph into a memorial.

Wreaths to commemorate “the victims of the wars, captivity and expulsion” were first laid at Die TRAUERNDE on Memorial Day in 1962. These were for German soldiers, victims of the Nazi regime and civilians from the previously German Eastern Provinces.

After its presentation, the press celebrated Die TRAUERNDE / The MOURNER as a “masterfully mature piece of art’ and as a moving “memorial to reflect human values”. Its form and subject were meant to guide to the memorial rooms – as the memorial hall was called at that time.

Die TRAUERNDE was unanimously found to be a worthy place for memorial events in the city. During the 1990’s however several criticised the memorial and the plaque on the ground.

The criticism is that Die TRAUERNDE as a symbol of commemoration, only recognised the victims of the First World War and solely represents women left home grieving their fallen men at the front. The varied group of victims of the Nazi regime are not represented.

Furthermore the figure stands as a Mary-symbol in a Christian context. This does not represent millions of non-Christian and especially Jewish victims.
Even if these were also meant to be represented, they were also not immediately recognisable on the plaque itself.

Die TRAUERNDE / The MOURNER has been created by Willy Meller (1887 – 1974), an artist from Cologne. The competition awarded no first prize, but Meller was successful in the process against Hans-Peter Auler, a young Art student from Oberhausen due to his long experience.

Meller was known for architectural sculpture. He varied his style from classical and expressionist to mannerist art. Since the end of the 1920’s, Meller created revanchist war memorials for German soldiers of the first World War which were typical of that time.

From 1933 Meller adjusted his art to the over-formed and heroic style of the Nazi visual form. He received several well paid commissions and produced sculptures which conformed to the Nazi system for locations such as the National Sports Grounds in Berlin, the Ordensburgen Vogelsang and Kroessinsee and the Seaside resort Prora.

After 1945, Meller presented himself as non-political, even though he was a member of the NSDAP since 1937. Furthermore, Meller was awarded the title of ‘Professor’ on Hitler’s 50th birthday and retained the title until his death in 1974. In 1944 he was entered into the “God – gifted list” or “Important Artist Exempt List” of artists considered crucial to Nazi culture.

In Oberhausen and also on a national level, commemorations have changed significantly in the last 60 years. Around 1960, Meller’s involvement in the Nazi ideology was not addressed. Today, his biography is raising questions especially since he never openly distanced himself from Nazi ideology.

At the start of the 1960’s, the only way to commemorate Jewish victims only succeeded when linked to German victims: e.g. soldiers, the displaced, victims of the aerial war. Today, victims of the German Nazi regime are defined completely differently, ranging from those in resistance movements to those women and men who were forcefully sterilised.

With the kind support of Landeszentrale für politische Bildung NRW